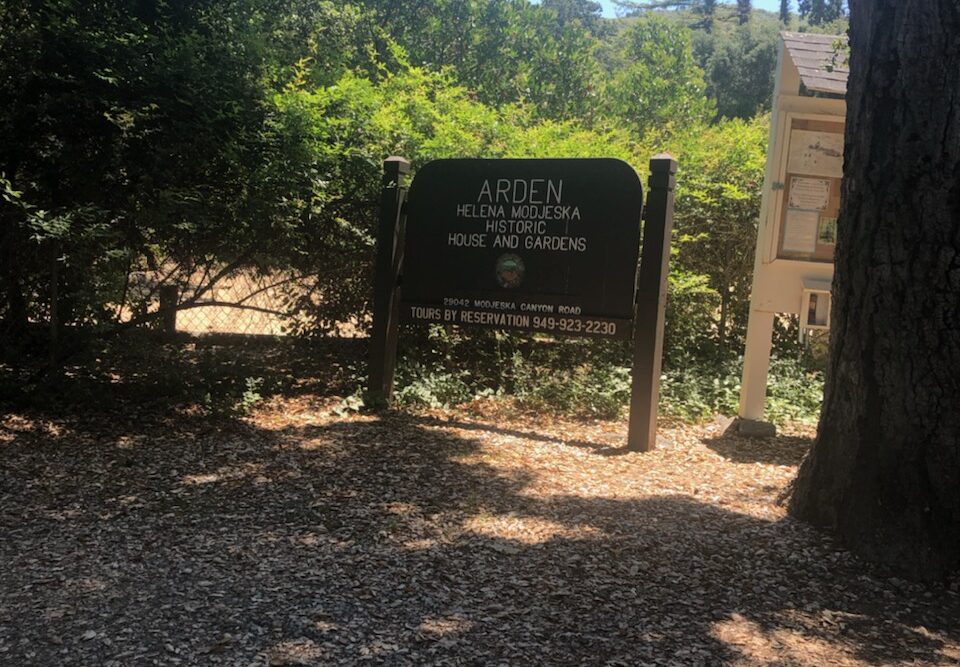 Helena Modjeska and her “Arden”

When I am showing tourists around Los Angeles, I am usually being asked by my guests to show them mainly Hollywood, Beverly Hills, Malibu, Santa Monica, or the standard places described in many guidebooks. Meanwhile, on my blog I would like to encourage you to visit other, very interesting places which, although maybe a bit remote from the tourist center of Los Angeles, are however very interesting and really worth seeing. Some even contain Polish accents and I wanted to show you one of them today.

When our cousin from Warsaw visited last year, we spent the first few days visiting Los Angeles and the surrounding areas. However, after seeing all the main places there we decided to visit the neighboring county, Orange County. There are beautiful, peaceful towns with very nice architecture and beautiful beaches, such as Huntington Beach, Laguna Beach and Newport Beach, and further from the ocean you can also find some interesting places. One of them is the museum / house of the great Polish actress Helena Modrzejewska.

Americans have difficulty pronouncing Polish surnames, so after moving to California, Helena Modrzejewska decided to shorten her name so that it would be easier to pronounce. Hence the name used by the Americans to this day, Modjeska.

Who exactly was Helena Modjeska?

Born in Poland as Jadwiga Helena Misel (born October 12, 1840 in Krakow, died April 8, 1909 in Newport Beach, California), she immigrated to the United States with her husband, Count Karol Bożenta Chłapowski in 1876, together with a group of settlers to create a colony agriculture in Anaheim near Los Angeles, California. Their colony ceased to exist in a short time, however, Helena quickly learned English and began performing on the American scene. Helena became famous and as an actress playing Shakespeare plays in theaters all over the United States, and her husband traveled alongside her for the next two decades. The story of Helena Modjeska is fascinating. She is not a very well-known figure at the moment, but she was as popular in the United States as our most-known contemporary rock stars. She is considered by the experts as the first celebrity, both in terms of fame and behavior.

Helena Modjeska’s Californian house at 29042 Modjeska Canyon Road is located in an evergreen oak grove on the banks of Santiago Creek in Modjeska Canyon at the foot of the Santa Ana Mountains in California, about 11 miles east of Lake Forest.

It was named “Arden” because it resembles Forest of Arden – a forest in Shakespeare’s play “As You Like It”. Helena wanted to find a quiet place, distant from the hustle and bustle, for the time when she did not perform on stage. To design a large Victorian country house, he employed one of the leading American architects, Stanford White. Together with her husband, she also designed gardens with olive trees, palm trees, English yew trees, white lilacs and a crown of thorns. It was their holiday home from 1888 to 1906, which Helena treated as a refuge in breaks between performances. The grounds are beautiful and you will certainly listen with interest to the story of the adventures of this couple trying to develop themselves in Anaheim, and then grow olives in the forest, but more importantly, a woman who has become a well-known actress, popular and valued to the point, that in order to move quickly from one place to another, she was forced to buy her own train to move around the US because she was performing in other cities every night. After selling her home in Arden, Modjeska lived in a house on Bay Island in Newport Beach, where she died on April 8, 1909. Her funeral took place in Los Angeles, but then her remains were transferred to the Rakowicki Cemetery in Krakow, and the funeral ceremonies turned into a patriotic manifestation. In Gazeta Lwowska of June 3, 1909, the following was noted: “A committee to bring Modjeska’s corpses to Cracow after correspondence with her late husband. of the deceased Karol Chłapowicki (Chłapowski) and her family, he marked the date of the funeral on 17 July, on that day the artist’s corpse will be transported from the Krakow railway station to the Kraków cemetery to the tomb family. On July 17, 1909, Gazeta Lwowska informed that at 9 there will be a service in the church of St. Cross, where the coffin was placed. During the service, the choirs of the Lvov opera will sing the Schopf memorial service. The funeral will start at 4:00 PM. The product will leave the church of St. Cross and will stop in front of the city theater building next to the Fredro monument. The choirs of the Lvov opera will sing “Ave Maria” Troszla, and the orchestra will play Chopin’s funeral march. Here he will speak the name of the Krakow director’s scene. Solski. On the four-caravan, a corpse was brought to the cemetery, a large chariot with wreaths rode behind the caravan, the funeral procession was led by Fr. Mikulski parish priest of the church Cross. The ceremony was attended by the Mayor of Leo, Vice-President Szarski, artists and journalists. In the graveyard above the grave, Lucjan Rydel will address the names of the dramatic authors.”

The funeral took place with a great pomp. A lot of wreaths were made, a few silver ones. One of them came from the Marshal of Poland, Józef Piłsudzki, with the inscription “Memory of the great artist”. The deceased family, Ignacy Paderewski and his wife, many delegations and crowds of the audience took part in the service. The funeral speech was delivered by Henryk Sienkiewicz. The Modjeska’s tomb is located on the main avenue, in the 54th quarters.

After the sale of the property, the story of her life inspired the developers who introduced fashion for holiday homes. From 1908 to 1923, Gustave A. Schweiger, who bought the property, managed the house as a holiday resort, B & B. In 1923, the Walker family from Long Beach bought plots in the canyon, the area of ​​which included Helena Modjeska’s house and the wooded area surrounding it. For the next sixty-three years, the Walkers, as property owners, spent their holidays in Arden.

Their long-term care and sensitivity to historic buildings and grounds resulted in the final behavior of the area. In 1986, the family sold the property to Orange County to create a historic park. In addition to the native vegetation in the canyon, there are still some original plantings from the Modjeska era, such as palm trees, English yew trees, white lilacs and the crown of thorns. In the 1930s, the Walker family also planted redwood grove.

Modjeska’s house is the only national monument in Orange County, in addition to the birthplace of President Nixon. A trip to the interior of the house / museum is free. The Orange County department park handles the management of this historic building perfectly. They oversee the renovation of the house and gardens. It is amazing that nothing is original at home, everything was done based on photos to show how it looked in the past. This historical place is located in a canyon on bucolic hills in the vicinity of vast suburban buildings and provides a pleasant rest. The tour will take you back in the late 19th century and the beginning of the 20th century, when Orange County was mainly a rural and agricultural area. One can feel here in a different world; in other times.

Because last year we were there with Joasia and her family on Sunday, we could not go inside the museum, because the tours take place only on Wednesdays and Saturdays. That’s why when my sister arrived in June this year, we went there again and managed to see this beautiful place exactly. For anyone who would like to choose to see this beautiful and very Polish pearl on American soil, I offer advice and language help in guided tours. Escape through the historic home and gardens are now offered at 10 on Wednesdays and Saturdays, upon prior reservation and the guides are often dressed in period costumes. This walking tour will take us through the years in which Madame Modjeska lived in her canyon and along the rocky paths of what she so affectionately called the Ardennes Forest. The tours last about an hour and a half. In the summer it can be very warm there. Nearby, there is also a natural nature museum and a bird sanctuary, to which we will return during our next visit.

2 Replies to “Helena Modjeska and her “Arden””