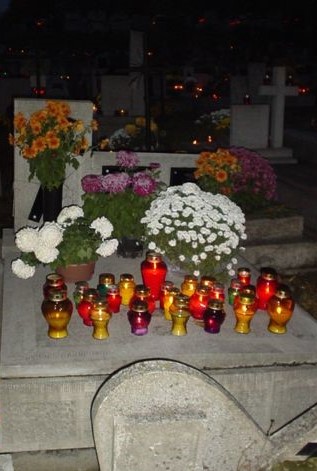 Beginning of November. All Saints’ Day, followed by All Souls ‘Day, is the time we devote to those who have already left this world. On the first of November we remember the martyrs and saints, and on the second of November, the remaining dead – we pray mainly for the souls of purgatory.

November holidays introduce us to the nostalgic mood of memories. We visit cemeteries, we meet our family, we experience the passing time more than usual.

It turns out that although almost everyone is going to the graves of relatives, many of us do not know what is the difference between All Souls ‘Day and All Saints’ Day. It’s worth finding out before someone starts asking us questions about it.

This holiday has been known in the Catholic Church since the ninth century. Initially, it was to commemorate the holy martyrs who did not live to see their own days in the church calendar, but for many centuries it was the day of all saints – known and unknown, who died long ago and live today.

This holiday has been known in the Catholic Church since the ninth century. Initially, it was to commemorate the holy martyrs who did not live to see their own days in the church calendar, but for many centuries it was the day of all saints – known and unknown, who died long ago and live today.

But not everyone probably knows that the Roman Catholic tradition of worshiping the saints on November 1 is over a thousand years old. Initially, the feast dedicated to the dead martyrs was celebrated on May 13. It is on May 13, 608 (some sources give 609 others 610) Pope Boniface IV. he decided that the Pantheon, which he had received from the emperor, would be the temple of the Blessed Virgin Mary and all martyrs. He sacrificed this object and made relics in it, and on May 13 it became the day of prayer for the martyrs. In 731, Pope Gregory III. he moved this feast on November 1, and in 837 his successor, Gregory IV. he decided that on this day, not only the martyrs will be remembered, but all the saints will be remembered.

The first of November is a day off work, so everyone uses it, most of it to keep the tradition of remembering the dead. In necropolises, the movement is intensifying already in October. Administrators of cemeteries start general cleaning, the inhabitants of towns and villages clean their graves, decorate tombs with flowers, burn candles. In Poland, during the times of the Polish People’s Republic, attempts were made to give the tradition a more secular dimension, hence the still popular name of the Day of the Dead. Much better, however, this name would fit until the second of November, which is actually dedicated to the memory of all the deceased.

They were established in the 10th century as a counterweight to pagan rites, including Slavic and Baltic “Forefathers’ Eve”. On November 2, 998, the Benedictine abbot in Cluny, France, Saint. Odilon ordered prayers for the souls of all the dead. This custom quickly spread in France, later also in England, Germany and Italy. A day of prayer that was initiated by Saint. Odilon became a Catholic equivalent for the pagan rites which were supposed to provide the living favor of the spirits. He described these customs in his poems titled “Dziady” by Adam Mickiewicz.

The tradition of remembering the dead and faith in the afterlife were very widespread in pagan times, when souls were preparing foods (groats, honey, bread, dumplings and even vodka). Some left them on graves, others at home on the tables. The doors to the houses were left open, hay was laid on the floor, so that the spirits would not be afraid to move. It was even a custom to call loved ones by name. Food was to give strength to stray souls on their way to heaven. Before the first two days of November, some housework was forbidden because their execution could offend the ghosts. Let the souls find their way at the crossroads of the fire. Fires were also fired on suicide graves. The fire was to purify these souls and protect the living people from evil.

In the culture of the Slavs and the Balts, contacts with the souls of the dead were devoted two days in a year, the so-called “Dziady” autumn and spring. ‘Dziady Jesienne’ was just on the second of November. On this day, feasts were organized in honor of the dead, to win their favor and protect them from hunger in the afterlife. Today, this holiday looks a bit different, but you can see some similarities. On November 2, the Roman Catholic Church prayed for the souls of the dead, mainly those who came to Purgatory. Prayers are to make their way to heaven easier. Popular are “Rememberances”, which consist in writing down the names of the deceased on the pages, for the souls whose prayers are to be said. Gregorian Holy Masses are also characteristic (30 masses in 30 days).

Regardless of religion and beliefs, in Poland, we commemorate our relatives and visit their graves in first and second November. In practice, this period often extends to the adjacent weekends and becomes a pretext for family gatherings.