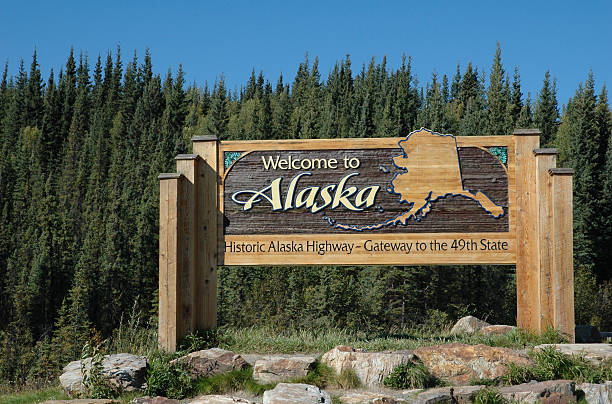 The first human beings arrived in Alaska about 13,000 BC. At that time Alaska was part of a land bridge that extended across to Siberia. People followed the herds of animals they hunted. Europeans arrived in the area in the 18th century. In 1741 a Dane called Vitus Bering led a Russian expedition to Alaska. They discovered there was great wealth in Alaska in the form of animal furs. Unfortunately, they also brought diseases to which the native people had no immunity. The British arrived in 1778 when Captain Cook sailed there. (Cook Inlet is named after him). George Vancouver sailed to Alaska in 1794.

Meanwhile in 1772 the Russians made a settlement at Unalaska. Then in 1784, they made a settlement on Kodiak Island. However, by the 1860s, the Russians had lost interest in Alaska. Over-hunting had depleted the supply of furs and it was difficult to supply bases such a long way off. So they decided to try and sell Alaska to the Americans. In 1867 US Secretary of State William Henry Seward signed a treaty to buy Alaska for $7.2 million – less than 2 cents an acre. However, it took 6 months to persuade Congress to ratify the treaty. Alaska formally passed to the USA on 18 October 1867.

In a single decade the population of Alaska soared. In 1890 the population of Alaska was just over 32,000 but by 1900 it had surpassed 63,000. Then in 1912 Alaska became a territory. Anchorage was founded in 1915 and Denali National Park was created in 1917. The Alaska Railroad was completed in 1923. President Warren G Harding went to Alaska to drive in a golden spike in a ceremony to mark the event.

Women in Alaska were given the right to vote in 1913. In 1937 Nell Scott became the first woman to serve in the Alaska legislature.

An Agricultural College and School of Mines opened in 1922. It became the University of Alaska in 1935.

In June 1942 the Japanese bombed Dutch Harbor in the Aleutian Islands. They also took the islands of Kiska and Attu. The Americans landed on Attu on 11 May 1943. By 30 May they had retaken the island. The Japanese abandoned the island of Kiska in August 1943. During the Second World War military bases were built in Alaska and as a result some Alaskan towns greatly increased in size. Meanwhile, Alaska Highway was built in 1942.

In 1957 oil was discovered in Alaska at Swanson River, on the Kenai Peninsula. Then on 30 June 1958, the Senate passed the Alaska Statehood Act. On 3 January 1959 Alaska became the 49th state of the union. The first governor of Alaska was William A Egan.

On 9 July 1958 an earthquake in Alaska caused a tsunami 524 tall in Lituya Bay. It was the tallest tsunami ever recorded. Then on 27 March 1964 (Good Friday), Alaska was struck by a devastating earthquake. It measured 9.2 on the Richter Scale making it the most powerful earthquake recorded in North America. It killed 131 people. But Alaska soon recovered and in 1968 oil was discovered in Prudhoe Bay on the Arctic Coast. To be exploited the oil would have to be transported by pipeline to Valdez and in order to build the pipeline disputes with the native people over land would have to be settled. They were settled by the Alaska Native Claims Settlement Act of 1971. The native people relinquished their claims in return for nearly $1 billion and 44 million acres. The Trans-Alaska Pipeline was completed in 1977. As a result, the 1980s were a time of prosperity for Alaska.

However on 24 March 1989 a tanker called the Exxon Valdez ran aground spilling 11 million gallons of oil. Since then the oil industry in Alaska has declined in importance. Today tourism is a major industry in Alaska.

The name Alaska is derived from the Aleut word “Aleyska,” meaning “great land.”

Capital: Juneau – located in the Southeast region of Alaska, has a population of 33,277

Motto: North to the Future Nickname: The Last Frontier, Land of the Midnight Sun

Alaska’s beauty and extreme ruggedness are reflected through its state symbols:

The Moose: Alaska’s State Mammal
Found throughout Alaska, and weighing as much as 1,600 pounds, the moose is the largest member of the deer family.

Dog Mushing: Alaska’s Official Sport
Used for centuries as a primary mode of transportation in Alaska, dog mushing has received renewed interest through the Iditarod.

Gold: Alaska’s State Mineral
Though Alaskan gold was first discovered in 1848, the Klondike Gold Rush of the 1890s brought thousands to Alaska and the Yukon, helping to open up Alaska’s interior.

King Salmon: Alaska’s Symbolic Fish
Weighing 25–50 pounds or more, king salmon will travel more than 2,000 river miles in order to spawn over a 60-day period, all while swimming upstream.

Willow Ptarmigan: Alaska’s State Bird
The consummate survivalist, the willow ptarmigan has feathered toes, and it changes colors from brown in the summer to white in the winter to camouflage itself and hide from predators. It’s easy to see why this tenacious bird was chosen to be an Alaskan state symbol.

Sitka Spruce: Alaska’s State Tree
The Sitka spruce, found along the coasts of northern California up through southeast Alaska, is the tallest spruce in the world. Are you sensing a theme in the size of Alaskan state symbols?

The Big Dipper and the North Star: The Symbols of Alaska’s Flag
The Big Dipper, also known as Ursa Major, represents strength. The North Star, Polaris, represents Alaska’s northern location and the importance of Polaris as “the ever-constant star for the mariner, the explorer, hunter, trapper, prospector, woodsman, and the surveyor,” as stated in the flag’s legal description.

Alpine Forget-Me-Not: Alaska’s Toughest Flower
The Alpine forget-me-not is found throughout Alaska in rocky, mountainous areas, and is one of the few flora whose flowers bloom in a true blue.

The Malamute: Alaska’s State Dog
Malamutes are prominent figures in Alaskan history, dating back over 5,000 years to the earliest Alaskan settlers. A fast, friendly breed, these dogs have served as transportation for people and goods, companionship, and protection.

Denali: Alaska’s Highest Point
This most distinctive of Alaska state symbols is the highest point in North America, standing at 20,310 feet.